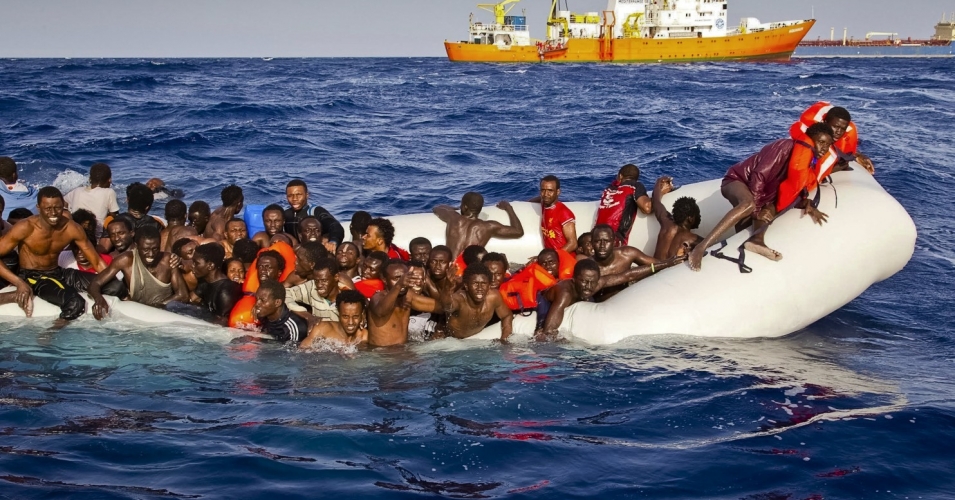 Instead of seeing people as humans like us, we see many as something ‘other’. They aren’t like us: they’re muslims, refugees, jews, negros, gays, homeless, whatever. This undermines the feelings we should have towards them, means that we treat them as sub-human. Don’t help them – they aren’t like us. Leave them to die.

My belief is that all humans are fundamentally good. People care about other people. We recognise that we all have the same humanity: the same feelings and emotions, pain and dreams. Except that sometimes, it suits somebody to block that feeling.

“The propagandist’s purpose is to make one set of people forget that certain other sets of people are human.” – Aldous Huxley

This can be seen in the way that the elites in the USA created and used anti-black racism to keep poor, working whites in check. It served as a distraction: poor whites should have been a natural ally to black slaves (and ex-slaves), as both were being exploited by the rich, ruling minority. Instead, racism was used as a distraction. Poor whites could have joined with black slaves and ex-slaves to demand better conditions for both of them; instead, poor whites were told to hate the blacks. The racism, portraying them as an ‘other’, and so these sub-humans didn’t deserve to be free.

The same can be said of the way Jews were treated, culminating in the holocaust. In many countries – including other continental countries and the UK – they were a despised other. This ‘otherness’ meant that people (and the country) would rather they died at the hands of Nazis than be granted asylum: many countries chose to accept very few refugees, even when Hitler offered to cover the costs.

In more modern times, we have the same sentient towards people fleeing destruction of other countries in the hope of a better life elsewhere (‘refugees’). Our prime minister described them as a ‘swarm’ – which does not give the idea of people who have some hope but no home, rather as an annoying insect pest. When hundreds of people die at sea, fleeing a homeland which has been destroyed due to (at least in strong part) western meddling, who have no other way to claim asylum than to try to get across the Mediterranean in boats, we don’t talk about people or children dying. We talk about migrants. Not like us, some ‘other’.

(Also notice: we had a financial crash and recession and our economy isn’t going so well. Perhaps the increased focus on migration was due to that… Don’t talk about the inequality in society and rich versus poor – nope, it’s all about the polish guy or syrian refugee coming to steal your job!)

‘Othering’ is part of racism, but it is not only in racism we see it. In sexism, the way that women are described as being fundamentally different to men is a form of othering. Man up. Don’t be a girl. There’s certainly more to sexism than just othering, but it’s a part of it. We also see it in the way that people with other differences are treated, such as disabled people or people with different sexualities. The same way, we can ignore homeless people: they aren’t like us, they are other.

So othering works by cutting the human ties of empathy which we otherwise would have – because they aren’t like us, they are other. As a political tool, this can help to change attitudes, by removing the empathy they might feel towards that person.

This isn’t a concept I’ve invented – it’s one I’ve heard about recently, but one I’ve been recognising for awhile. If we can see it and understand it, we can call it what it is and try to reduce some of it’s effect.

Naomi Klein (author, journalist, campaigner) recently gave a speech (also in essay form) about the violence of othering in a warming world. It’s really strongly recommended. She talks about how othering has been a huge part of climate change – but she also talks about how many problems that we treat as disconnected are actually very closely related. As the world warms, sea levels rise and the climate changes so that in some places there is much less rainfall (and so less food too), crises are going to continue. ‘Otherness’ is a key part of this: when it happens to ‘others’, we don’t care as much.

Another great article I read, which contributed to the thinking of this post, is this one. It discusses why many poor white Americans support Donald Trump, and in doing so goes through the history and politics of slavery (as discussed earlier in this post), of the way that social security cuts were racist with Reagan, how Martin Luther King was campaigning not just for blacks for also for poor whites, and how Trump’s politics of appealing to white people is built on an othering of muslims, mexicans, black people, and chinese people.