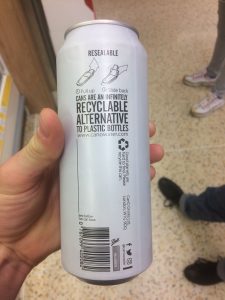 The single-use drinks container is terrible regardless of material. It’s absurd that water is a commodity sold for profit, when it could and should be so easily available. Yet freely available water goes directly against corporate profit, when there is so much money made from selling drinks.

The problem is that the problem is our very way of life. A way of life which treats the environment as something which we may take from or throw away into, which seeks comfort, profit and luxury instead of sustainability.

We are interconnected with the rest of nature. This needs recognising and taken seriously. If things go badly for the environment, things go terribly for humans. For example, if we destroy ‘the oceans’ – marine life and ecosystems such as fish – then we run out of fish as a food. If we farm in a short-term way, we run out of quality soil to grow food on. If global temperatures increase too much due to human-caused pollution… things will get very, very bad. And these are all problems we have.

So it is imperative to think about how we can be sustainable. Yet even here we face big difficulties, as it is so often seen through an individualistic lens. You should use less water when showering, recycle more, eat better sourced food, cycle more, and so on. But this individualised approach completely misses that it is a systemic problem. It isn’t about a bunch of individual people being persuaded to Go Green! and become vegan hippies, it’s about changing our whole society and systems within it to be sustainable.

(The focus on individual action is no accident: systems have power, and power wants to be invisible. Coca Cola want you to think that you have a lot of choice whether you buy standard Coke, or a lemon-lime flavoured drink, or diet versions, or juicies and smoothies, or water. But Coca Cola owns them all, so people only have the choice within their empire.)

This sort of change must happen across all manner of domains. Including short-term clothing for fashion, car usage, flying around the world for holidays, eating fish and meat and various other foods. The focus is often off too, as campaigns chase easy wins.

This is a huge task. And it won’t happen within our existing and deeply flawed economic system, which requires continued growth and chasing profit. We need a big political shift to build a society which is sustainable.

Sustainability a matter of continued human existence. If we destroy our planet, we are destroying ourselves.

(Although really there are a whole load of inequalities and power politics which must be acknowledged as part of this discussion. The point is that it isn’t about abstract harm to “the environment”, instead it’s about harms to humans. However, we aren’t a collective indivisible ‘humanity’. There are rich/powerful people who are exploiting poor/powerless people. When there are food shortages, rich people eat, poor people starve and die. We see the so-called “housing crisis” play out now, where rich people can have luxury housing and multiple housing (not to mention the injustice of rent. So we must also seriously acknowledge and address these.)

(George Monbiot wrote a similar piece to this in his recent Guardian column <https://www.theguardian.com/commentisfree/2018/sep/06/save-earth-disposable-coffee-cup-green?CMP=share_btn_fb>. I read it, but had thought this and drafted a different post on this theme before it.)